The state of public finances in South Africa is dire, President Cyril Ramaphosa admitted in his State of the Nation Address (SONA). But apparently not so dire that this would be an obstacle to the creation of a sovereign wealth fund (SWF) or a state bank.

The SWF and the state bank were among the many policy initiatives unveiled by the president in his delayed speech. (The EFF ensured that the President’s speech was an hour late.) 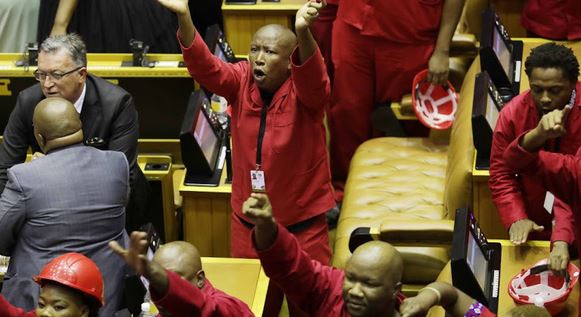 Pertaining to this picture: The weaker the argument, the louder and more repeated is the rhetoric – Ken Poirot

There was also plenty of talk of action on the fiscal front. The President said that the government is engaged with all stakeholders and labour (read unions) to contain the bloated public wage bill and reduce wastage.

All eyes are now on Finance Minister, Tito Mboweni’s budget speech in March. It is expected that he would outline the plans for the SWF and State Bank.
The SONA is available on YouTube. As is the disdain for order and respect for our country’s president which the speaker could not contain. Mr Ramaphosa may God help you.
Source: DM