The question of how many more stones are going to be rolled into the way of farmers responsible for feeding an increasingly larger population, can be asked with the latest announcement of the Minister of Water Affairs and Sanitation, Lindiwe Sisulu.

This concerns her announcement of forced installation of water meters for irrigation farmers. Transvaal Agricultural Union SA had sent a letter to the minister highlighting various issues which had come to the attention of the organisation.

The Government Gazette published a notice on January 17 to this effect,  affording farmers thirty days to install these devices, at their own cost. Any water users who are not members of a State Water Scheme or Water Users Association must install the meters. According to the Department, the purpose is to ensure the sustainability of water use in South Africa because the demand for water is higher than the available supply.

“TLU SA agrees that the monitoring of water use in the country should be better,” said Steven Vermaak, chairperson of TLU SA’s Water Affairs Committee. “The delay in establishing Water User Associations is, however, a more pressing matter which should be prioritised. It will contribute to manage the use of water more efficiently. In our correspondence, we asked the installation of water measuring devices to be postponed until these associations are set up.”

A single 50mm water meter which adheres to the specifications set out by the department, costs around R18 000, but the bigger the in- and outlet, the more expensive it gets. The water used for irrigation is of such poor quality that farmers will have to install filters as well, pushing the cost up even more. Some irrigation farmers will have to install ten or more devices.

Farmers also have to keep monthly water measurement records under specified regulations and submit it to the department.

“The measurement of water use is the responsibility of the state and not that of the water user,” Vermaak said. “The authorities are doing an abysmal job of managing the use of water. On top of that, there aren’t even enough water meters in the country to complete this task. TLU SA believes that the Water User Associations will play an essential role to solve the dispute between TLU SA members and the department, concerning the payment of invoices. It will also contribute to shortening the existing, long line of communication and solving problems related to water delivery accounts faster.”

According to the TLU SA statement, the department had so far failed in processing various applications for the establishment of Water User Associations, despite the fact that some of these applications were made more than five years ago. 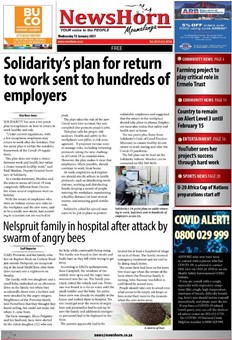